Commemorate the 242nd anniversary of the Battle of Brooklyn

More than 1,000 Americans were either killed or captured, and the British controlled Brooklyn and Manhattan for nearly seven years.

Even though we lost the battle, we won the war. Commemorate Brooklyn’s revolutionary history with events – including war reenactments, exhibits, and walking tours – that take place in the neighborhoods where the battle was fought.

Below is a list of upcoming memorial services. For more information, see the Battle Week section on the Old Stone House website.

A taste of the revolution at Green-Wood Cemetery
When: Wednesday, August 22nd, 7pm to 8.30pm
Where: Green-Wood Cemetery on 5th Avenue on 25th Street
What: Mark the 242nd anniversary of the Battle of Brooklyn by exploring some of the flavors of Revolutionary America. Food historian Tonya Hopkins is joined by Brooklyn-based cider makers Joy Doumis and Jeremy Hammond for a chat and tasting. Learn how cider was made and how Doumis and Hammond make their own apples from Green-Wood. The event is 21 plus.
How much: Tickets $ 30, $ 25 for Green Wood members

Gowanus Dredgers Battle Paddle
When: Wednesday, August 22nd, 6 p.m. to 8 p.m.
Where: Gowanus Dredgers Canoe Club, 165 2nd Street (near Bond Street), Gowanus
What: Learn the story of Gowanus at Dredgers 2nd Street Dock. Loyalists and revolutionaries are invited to take a canoe tour through the battle voyages and claim coastlines without barriers (similar to Dutch canals). Walt Whitman’s poem The Centenarian’s Story will be read at 6.15 p.m. 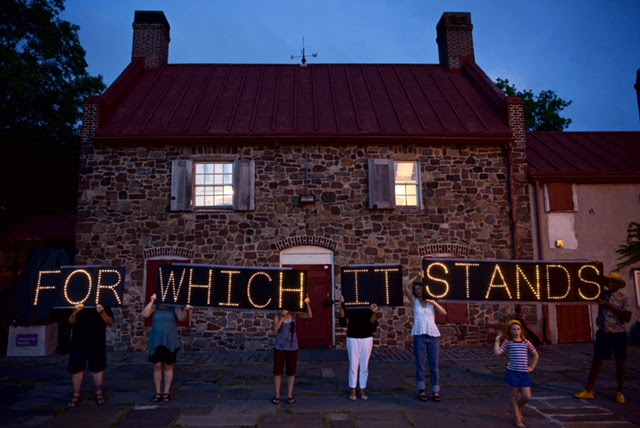 Exhibition opening: what it stands for
When: Thursday, August 23, 7 to 9 p.m. (exhibition until October 14, Friday from 3 to 6 p.m. or by appointment)
Where: The Old Stone House at 336 3rd Street (between 4th and 5th Avenues), Park Slope
What: The Old Stone House presents this contemporary art exhibition that blends Brooklyn’s revolutionary history with some of today’s most pressing issues. Artists reinterpret and offer their “fresh take on the flags of the American Revolution and today, including the contradictions inherent in their symbolism”. 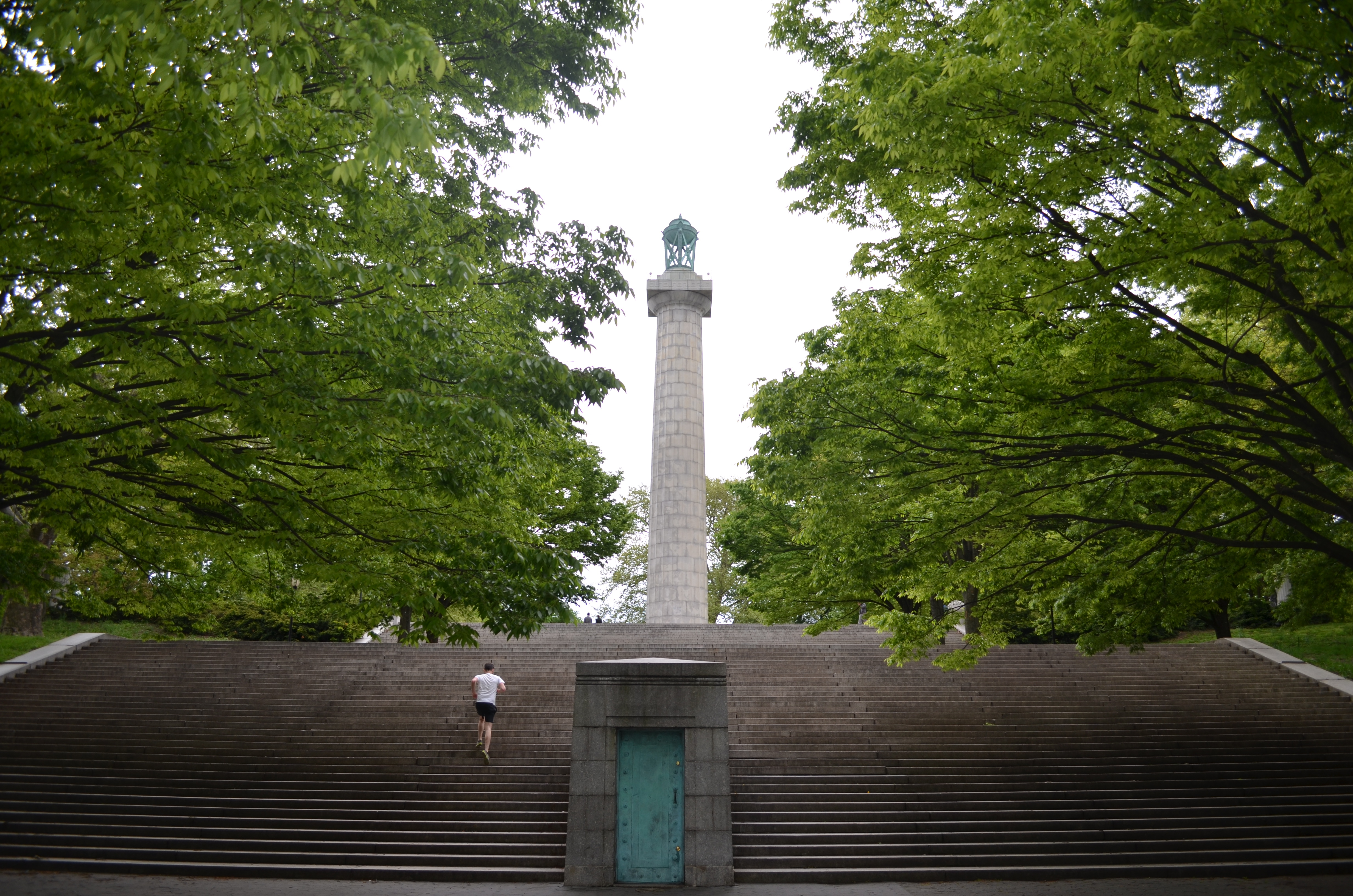 Prison ships martyrs commemoration
When: Saturday, August 25th, 10 a.m. to 11.30 a.m.
Where: Fort Greene Park, Jail Ship Martyrs Memorial (Dekalb Ave & Washington Park), Fort Greene
What: The Society of Old Brooklynites is hosting the 110th annual memorial service to commemorate the prison ship martyrs at the foot of the prison ship martyrs memorial. The memorial will include a sea pipe ceremony, the national anthem and a wreath-laying ceremony. 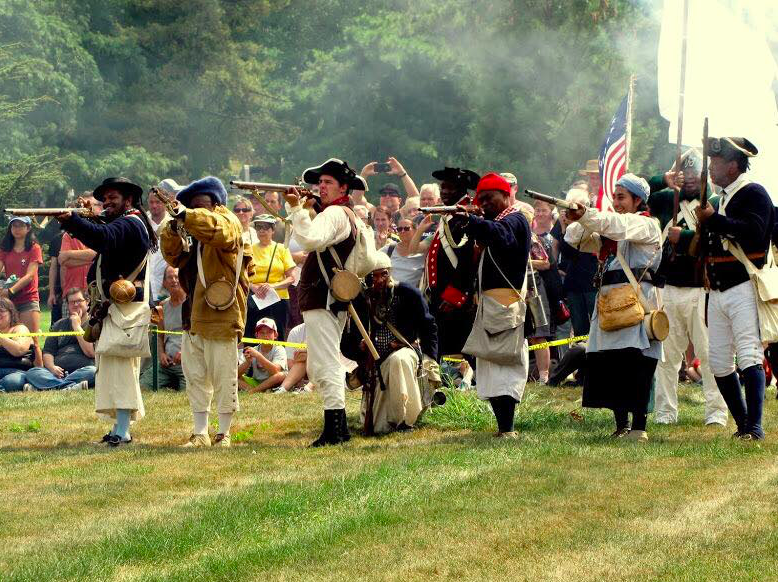 Battle for Brooklyn Monuments Tour
When: Sunday, August 26th, 11 am-12pm
Where: Leffert’s Historic Home, 452 Flatbush Avenue (near Empire Boulevard), Prospect-Lefferts Gardens
What: A guided tour hosted by the Prospect Park Alliance that begins at Lefferts Historic House and runs down East Drive, where attendees see some of Prospect Park’s War of Independence monuments.
How much: Tickets $ 10 – SOLD OUT

Commemoration of the Battle of Brooklyn in Green-Wood Cemetery
When: Sunday, August 26th, 10 am-3pm
Where: Green-Wood Cemetery, 500 25th Street (on 5th Avenue), Greenwood
What: Green-Wood celebrates the battle with its annual day of family friendly events, including American and British troop re-enactors, Revolutionary War music, a trolley tour (sold out), a parade of flags, artillery demonstrations, and more. See event schedule below.
How much: With the exception of the trolley tour, the following events at Green-Wood Cemetery are free. Please register online in advance.

12:30 p.m. – BATTLE OF BROOKLYN PARADE: Grab a Revolutionary Regiment flag, wave it, and march to Battle Hill with The Regimental Band of the United States Merchant Marine Academy. Starts at the main gate.

1:15 p.m. Memorial Service: Honor the spirit and heroes of the Battle of Brooklyn with this memorial service on Battle Hill overlooking New York Harbor.

The perfect purpose scorers meet within the matchup Chicago-Brooklyn