A coop is rising in Brooklyn

Brooklyn’s Bianca Bockman says Brooklyn is fast becoming a dining destination for iconic local food, but some residents have to take the subway to find a good tomato or lettuce.

“When some people think of Brooklyn food, farm-to-table restaurants, bottomless mimosa brunch, and farmers markets come to mind,” said Bockman, director of food justice programs at RiseBoro Community Partnership in Brooklyn. “However, there are communities of long-term residents in Central Brooklyn who have been left behind by this food boom. In a community where the grocery to bodegas ratio is 1:57, residents aren’t looking for the nearest Instagrammable restaurant – they just want a reliable source of affordable, healthy food. “

And food like that is hard to come by in central Brooklyn. “Bodegas: we need them. We love her. You’re great, ”Alexis Harrison, a Central Brooklyn resident and partnerships coordinator for BedStuy Restoration Corporation, told reporters. “But the level of quality products they offer compared to what grocery stores should deliver is not balanced. And that ultimately hinders our ability to lead healthy lives. “

That’s why a group of Bedford-Stuyvesant and Crown Heights residents – mostly blacks – take matters into their own hands and form the Central Brooklyn Food Coop (CBFC).

On October 16, the CBFC launched its first Kickstarter campaign, a fundraiser that will run until November 22, 2019 at 11:59 p.m. EST. The leaders hope that after six years of organizing the community, they will raise enough money to open the doors of this member-run grocery store in the spring of 2020. The cooperative has already surpassed its original target of $ 25,000, but leaders want to raise $ 100,000 for Kickstarter so the company can do renovations, build a demo kitchen, and create community programs like cooking classes for kids.

“As black people in a predominantly black neighborhood that had been hit for so long and struggled economically, food became a symbol – a symbol of what we didn’t have and what we lacked,” said Mark Winston Griffith, General Manager of the Brooklyn Movement Center, the organization that incubates the CBFC. “So building the Central Brooklyn Food Coop is one way of getting this ship back in order. And not to see food as something that must be given to us, but as an expression and assertion of our own strength, our own genius, our own creativity, our ability to do for ourselves – building institutions that will support us and are literally feed us. ” 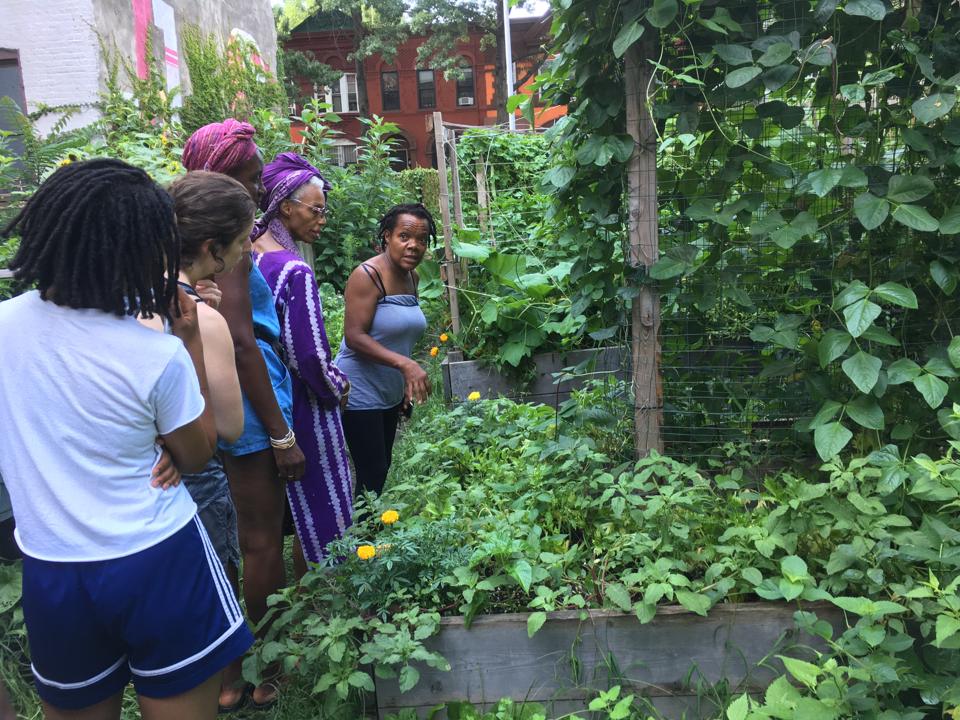 Jane Sandoval gives members of the Central Brooklyn Food Coop a tour of 462 Halsey Community Gardens, where … [+] They and many West Indian residents grow their own produce.

Meanwhile, the cooperative relies on a tried and true but not widely used model to keep its doors open: The Central Brooklyn Food Coop requires all members to work around three hours a month.

Since labor costs are typically the largest cost of running a grocery store, cooperatives using this model can charge less for the food they sell. Most cooperatives do not require membership fees, but often have a higher mark-up between wholesale and retail – prices that can make them unaffordable for a large proportion of the people they wish to serve.

Brooklyn is, in fact, one of the fastest growing areas in New York City. Coops are meant to be democratic and represent a new, better way of running a grocery store. However, critics point out that if they do not apply the membership work model in neighborhoods like those in Central Brooklyn, they may contribute to gentrification.

CBFC founding member Rae Gomes is determined that this will not happen. “We want our children to have a place where they can study and enjoy food,” she told reporters. Explaining that the store wants to support community education, black farmers and other paint farmers, she concluded, “This is not just a grocery store. This is an effort of community self-determination. “

“When we say we are black and communal, we mean not just the people who own the business, but the local business owners who sell baked goods or jams,” Eubanks said. “There are many community gardeners who have a lot of high quality, high volume products for sale. We want to buy from them. It’s really about how we can use the support for people who don’t have access to bigger markets, and beyond Brooklyn, support local, small family businesses that are also battling to compete. “

The cooperative started accepting invested members in January 2019, and although the doors are not yet open, it already has 54 members. Each member will hold a stake in the cooperative and contribute to lowering operating costs through an investment fee and the three hours of monthly work – a model that the Park Slope Food Coop has been successfully using since 1973. Perhaps most importantly, all members are treated equally so that those with higher incomes cannot “buy” their way out of work in the business.

This is especially important in places like New York City, where rising rents, an explosion in luxury homes, illegal evictions and gentrification are driving black and low-income people out of the city and accessible neighborhoods. A 2017 report by the Regional Plan Association that examined walkable neighborhoods with good access to work found that from 2000 to 2015, households with sales of more than $ 100,000 grew by 160,000, while households with annual sales of less when $ 100,000 shrank by 61,000 over the same period.

With this in mind, Griffith sees the project as “saying that we have the bare minimums and the ability to do for ourselves. I believe a grocery store owned and operated by long term residents – well, I can’t think of a more telling statement about our right to be here and to be here in the future. “